Imphepho is not a smudge 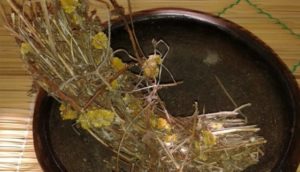 “Imphepho (the flowers of the everlasting family Helichrysum), is an important and widely used plant as a ritual incense in South African traditional medicine. Bundles of the dried flowers are often seen on the medicinal plant markets in Johannesburg where they are sold to the public and to healers alike. The dried flowers and stems are often burnt by diviners to invoke the ancestral spirits while practicing divination for clients. In 2010, while conducting a public workshop on ethnobotany, a colleague and I burnt a large bundle of imphepho in a room with attendants. The smoke filled the room and we inhaled the smoke and talked about its use. Within a short time, the group became quiet and meditative and an atmosphere of calm prevailed. Having noted its calming effects among the group, we discussed its ritual use and we made a connection with the use of frankincense, the resin obtained from trees of the genus Boswellia that has been used since antiquity in various religious ceremonies in Christian churches (Moussaieff et al., 2008). Frankincense has been shown to have an anxiolytic (anxiety reducing) psychoactive effect in studies conducted by the John Hopkins University (Moussaieff et al., 2008). Likewise, the psychoactive chemistry of imphepho has been indicated in phytochemical studies, where Stafford, Jager and van Staden (2005) determined the GABA-receptor binding effect of extracts from various Helichrysum species used in South Africa; GABA being a significant inhibitory neurotransmitter chemical responsible for relaxation. Thus, there is an empirical basis that, at first hand, is not apparent to the use of imphepho and frankincense alike for spiritual healing purposes; to promote a calm and relaxed state of mind through the inhalation of the plants psychoactive chemicals that is conducive to religious and spiritual practices such as praying.”
Excerpt from Sobiecki, J.F. 2014. The intersection of culture and science in South African Traditional Medicine. Indo-Pacific Journal of Phenomenology. 14 (1): 1 -11.

Having worked many years with a traditional Sotho healer and having finished a medicine initiation with her, I became accustomed to her use of Imphepho when doing the bones-that is using a multivariable technology to read a persons current relational dynamics and situation. Having used the plant myself I came to recognize its dual action of relaxing the body while also slightly opening a part of the psyche one could call the associate or intuition aspect.

Yet recently, I noticed Imphepho has become used as a clearing smudge before rituals.
This is certainly not the use that traditional people employ it for-other fat and herb mixes are burnt by the door of ones shop so as to attract people. Traditional healers use the flower to open up their connection to ones ancestors.
I recall my teacher explaining you do not use Imphepho often, as it opens the spirit and to much opening is not necessary.
From other literature imphepho could also be eaten or made into a tea with milk as part of the traditional healers initiation (Callaway).
My own experimentation has also brought me to realize that if one burns enough of it in a room it will sedate you to the point of sleeping very calmly-and knowing its antibacterial properties it can fumigate a room from insects.

However I question whether westerners are using the plant now mistakenly as a smudge because it is most definitely a psyche opening plant foremost and not a cleansing plant.
White sage is characteristically a high vibrational medicine that can shift subtle energy is how I would describe it-leaving an uplifting feeling.
While impepho typically makes me feel I am going deeper.

It is quite possible with without proper training and transmission plant use can be incorrectly appropriated especially with the paucity of good and wise elders to guide.

Another example of the overlooking of plant technology is the current focus on the mind opening plants such as Ayahuasca often with a lack of similar emphasis on the equally important precursor categories of plant medicines namely the cleansing, strengthening and protective categories of plants that all work together to result in successful healing to occur. This is why a few months of plant medicine initiation occurs-to go through all these equally important phases of medicine. I underwent this South African medicine initiation that allowed me to recognize the pattern of plant use when other researchers grouped plants in exactly the same categories in one paper.
Elaboration on this important pattern of shamanic plant use can be found here: http://phytoalchemy.co.za/2018/02/14/cross-cultural-technology-healing-consciousness-using-psychoactive-plant-medicines/

The important point here is that because of the acceleration of culture change it is indispensable to conduct fieldwork investigating the traditional cultural aspects of our South African plant use from old traditional healers especially, and not only the phytochemistry investigations that receive most focus. The imphepho example to me is an example of the cultural change in use of a medicinal plant that poses many further questions.

The Remarkable Healing Properties of the Resurrection Bush